Fall semester’s first University Senate meeting ended with uncertainty about the future of faculty contract negotiations, updates to Rutgers student services and the announcement of a free speech advisory panel at Rutgers.

At approximately 12:30 p.m. on Friday, members of the American Association of University Professors and American Federation of Teachers at Rutgers (Rutgers AAUP-AFT), alongside the Rutgers chapter of United Students Against Sweatshops (RUSAS) and other organizations met at the College Avenue Student Center calling for “fairness and bargaining” and the preservation of health services. 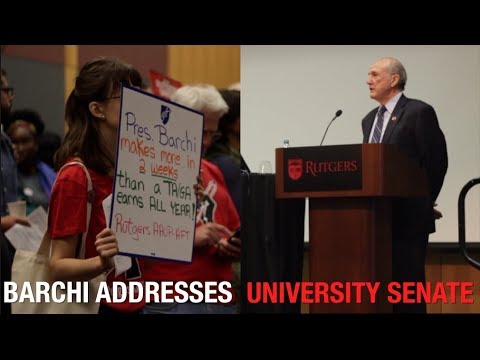 Faculty contracts expired July 1, according to The Daily Targum. Since then members of the union have been working on expired contracts, which has created uncertainty among union members.

“While Rutgers President Robert Barchi has a two-year extension at Rutgers, 20,000 workers are working without a contract and University management is negotiating a questionable deal to privatize vital public health resources …,” organizers said in a media alert.

Earlier this month it was announced that Barchi would stay on as University president for at least two additional years, according to the Targum. Though he said he will not receive a raise, protesters have long taken issue with Barchi’s $676,260 yearly salary — which by their calculation equates to $325 an hour — as of early 2016, according to an article from NJ Advance Media.

The last update made to Barchi’s salary was a 2-percent pay raise that year — retroactive to the year before (2015) — with a $97,000 bonus eligible to increase at his next performance review due to the pay bump, according to the article.

Throughout the meeting, members from both organizations stood with picket signs raised at the back of the room, hollering ad-lib commentary about their grievances with Barchi’s handling of these issues — “Bargain with the Union,” “Do your job” and “You expanded your contracts, how about the workers?” to name a few.

Aslam Kakar, a Ph.D. student in Global Affairs and teaching assistant who used to be a part-time lecturer, said there is a decrease in funding for part-time lecturers that makes it hard to teach and do research.

“When I was a PTL that was the only job I had in addition to a few hours of tutoring,” he said. “So, being a full-time Ph.D. student with no stipend and no fellowship, no TAship, it was so hard to just live. Because, I was teaching one class and after taxes I used to get $700 and that was my monthly budget …”

He said that things like longer contracts are important to lecturers because they provide stability, and that without pushing for these things through protests and other events, they might not come to be.

In his presentation during the meeting, Barchi said that the University and the union are still bound by the terms and conditions of the expired contracts. This means that neither faculty nor staff will be financially harmed, nor lose benefits or wages while negotiations persist.

Terms of the new contracts once agreed upon are applied retroactively to the end of the previous contracts, he said.

Barchi said that recently agreements were settled with “Teamsters Local 97 and FOP Local 164, representing 9 percent of our unionized workforce,” and that he hopes negotiations will be finished soon.

“In addition, I have authorized a 3-percent across-the-board salary improvement program for certain eligible non-aligned staff employees, retroactive to July 1,” Barchi said. “Decisions about a similar program for non-aligned employees who are administrative or managerial will be made at a later time.”

Justin O’Hea, a member of Healthcare Professionals and Allied Employees, said that he was most concerned with the issue of privatization.

He said that the partnership between Robert Wood Johnson Barnabas Health and Rutgers is an example of privatization that could squeeze the clinical staff in an attempt to make a better bottom line and marginalize at-risk groups.

There are approximately 2,500 full-time HPAE members at Rutgers currently, he said.

“We’ve seen this train coming for quite some time,” O’Hea said. “Really what we’re looking at is the privatization of almost all the community mental health and addiction services in this area.”

In his presentation, Barchi said the partnership is between two separate entities and is not privatization of union or labor workforces. He added that no layoffs are planned at Rutgers and there will not be a wholesale transfer of Rutgers or RWJBarnabas Health jobs.

O’Hea said that he is worried about the “muddy” language of the deal, which left members of his group confused about the future of the University.

“We want a seat at the table,” he said. “We want to help steer the direction of this institution. We’re the people (who) keep it running, we’re the people who run it.”

Andrew Urban, an associate professor in the Department of American Studies, said that expired contracts cause uncertainty and leave faculty unsure about their wages, how sabbaticals will be handled and if there will be a wage increase.

He said the administration showed up late to the last bargaining meeting, so step one is to get both sides to the table for serious negotiations.

“The idea that they can’t even make it to the table, I mean obviously that’s one moment, but it’s very symbolic I think of just the way they’ve been approaching the overall process,” Urban said.

Ahan Sikri, a School of Arts and Sciences junior and RUSAS spokesperson, said this is a union coalition action in conjunction with Rutgers One — an alliance of students, staff, faculty and alumni united to defend quality public higher education, according to its site.

“(The Union is) seeing and we’re seeing, not just with the unions but students on campus, the massive corporatization of Rutgers,” he said. “Basically, all the money we are putting into this University is being cycled up to the top and the administrative boat is getting higher, students are suffering — there’s food insecurity on campus, and so how this is also connected to USAS is that we are fighting for a $15 minimum wage and we think that is the most instrumental way to give capital back to those students …”

RUSAS and AAUP-AFT have always kept close ties, but have most recently employed a “bargaining for the common good strategy” that combines the individual struggles of each group — contract negotiations for faculty and higher wages for students — under one collective.

At a Board of Governors’ meeting last year, students received police charges for disorderly conduct after an overwhelming number of protesters who entered Trayes Hall at the Douglass Student Center forced an early adjournment.

Sikri said this, along with the administration’s willingness to take action against protesters, has “added a layer of consciousness to organizing” and compelled the organizations to use alternative protest strategies.

“What this action is, is less of a disruptive one …” he said. “RU senators are not our enemies, they are the people we’re trying to vie their opinion. Administration is the people that are in direct conflict with us. That’s the people that we’re going after.”

Updates to the University announced at Rutgers Senate Meeting

During his speech, Barchi announced updates about everything from the introduction of a fully electric fleet of Rutgers buses to progress being made to extinguish the RU screw with help from a new myRutgers.

Here is a list of highlights that are coming to Rutgers or are already in place.

Barchi said that 18 buses were added to the fleet last year to reduce crowding during peak hours. Also, a new bus tracking system, Transloc, was implemented, as well.

Barchi also said that the tandem buses are in the process of being phased out, and that within the next few years the University will be switching to an electric bus fleet.

At the Scott Hall bus stop, a new bus shelter was installed to improve the student experience, he said.

It found that providing incentives and pre- and mid-class surveys could increase a high response rate and benefit students and faculty.

The framework is being implemented at Rutgers—Camden and Rutgers—Newark, and RBHS has already been doing much of what the task force recommends, he said. At Rutgers—New Brunswick, the Edward J. Bloustein School of Planning and Public Policy and the School of Management and Labor Relations conducted pilot programs.

Barchi said other schools are being encouraged to join the program in the upcoming academic year.

Barchi boasted that the University is making progress toward adopting a “one-stop” concept for the administrative interactions that students have with the University. In comes the new myRutgers portal with University information, grouped into intuitively named channels — for courses and registration, grades, degree, financial aid and email — the platform keeps student involvement at its core.

“It’s one thing I heard about when I came here called the Rutgers screw, I don’t want to hear about it anymore,” Barchi said.

“Although for some it may seem an eternity, our students are here for just a short time — four years in the majority of cases. But once graduated, they are Rutgers alumni for a lifetime,” Barchi said.

In October, Rutgers will reopen its arms to its alumni through the grand opening of the Alumni Center at Rutgers—Newark, and the Alumni House at Van Nest Hall on the College Avenue campus.

Over the last two years, Rutgers has advocated for DACA students, including a student-led campaign that sent more than 45,000 letters in support of DACA to federal senators and representatives, Barchi said.

Earlier this year, James Livingston, a professor in the Department of History, was placed on administrative leave following a series of Facebook comments the University deemed were in violation of its discrimination policy.

Approximately one month later, Barchi issued a statement that said he asked the University’s Office of Employment Equity (OEE) to reexamine Livingston’s case — he added that the report was made available before he was able to examine it.

On Friday, Barchi announced the formation of a Free Speech panel at Rutgers in light of protections that allow for speech that some find “offensive or morally repugnant.”

The advisory panel will be comprised of faculty members and no student representation, Barchi said in response to a question from a student senator from Rutgers—Camden, Michael Van Stine, a student in the Graduate School, at the meeting.

“The investigations interview students, they interview staff … what we’re trying to do here are to get a small group of legal experts with deep experience at the national level in these issues … that’s the case for each and every one of the people on that committee, which, incidentally, has already been created and has already met,” Barchi said.

Christian Zapata is a School of Arts and Sciences senior majoring in journalism and media studies and minoring in philosophy. He is a News Editor @ The Daily Targum. For more updates, follow him @c_zapata161 on Twitter.

Ryan Stiesi is a School of Arts and Sciences senior majoring in journalism and media studies and minoring in entrepreneurship. He is a News Editor @ The Daily Targum.

Original story from The Daily Targum